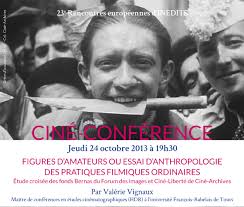 Research and scholarship on amateur archives and filmmaking practices remain at the periphery of film and media studies, and historiography. This situation perseveres in spite of a research revival among film historians and archivists at the international level since the early 1990s, as attested, among other things, by the establishment of the Association européenne des inédits (known since 2008 as INEDITS: Amateur Films/ Memory of Europe – Films amateur/Mémoire d’Europe), which has since 1991 brought together individuals and European institutions dealing with amateur filmmaking. Currently, the association has more than 40 members. The National Film Archive in Prague (hereinafter NFA) has been one of them since 2005.

An important activity of the association is the annual three-day conference. These meetings provide a platform for knowledge exchange and best practice in the field of collecting, preserving and valorising amateur films, and also include presentation of companies producing technical equipment for digitisation of small gauge film, such as 8mm, S8, 9,5mm and 16mm.

This year, this international conference will be held at the NFA in Prague, Czech Republic, from October 30th –till November 1st 2014. It will be the first time that an institution from Central Europe will host this event. The Czech Republic’s history, as a former part of the communist bloc, also partially influenced the choice of this year‘s theme: Amateur Film in the Eastern Bloc. As such, the conference focuses not only on the history of amateur filmmaking and its archiving, but also its current and future situation.

This conference seeks, first of all, to map how amateur filmmaking developed in socialist countries during the Cold War (but not solely), and aims to draw parallels or highlight differences in the practices, and perhaps cultural specificities regarding amateur film. Thus creating an European comparative context.

Topics and approaches might include, but are not limited to, these questions: What role have government or other organisations played in amateur filmmaking practices? What are the similarities and differences between amateur filmmaking in capitalist and socialist states? What are/ were international contacts and cooperation between amateur filmmakers, on the individual level, as well as the clubs and national institutions? Are there differences and/ or similarities that can be traced to be cultural specific?

Secondly, the conference aims to describe specific problems and practical tasks in archiving amateur films, including. Contributions should be focused on acquisition, archiving, conditions of storage, dissemination and restoration of amateur films generally, or in specific case studies. All these aspects can be analyzed not only on example of specialized state institutions, but also from perspective of private collectors (often professional filmmakers).

Both thematic areas should offer a base for lively discussions, exchange of experiences and contacts between individuals and institutions that will enable extensive collaboration in the future.

The language of the conference will be English and French. Proposals of 250 words, together with a brief CV, should be sent to Jiří Horníček, program coordinator, at jiri.hornicek@nfa.cz, by 31 May 2014. Notification of acceptance to the conference program will be emailed by June 15th 2014.

This conference is of course open to the public, and anyone interested in amateur films is welcome to attend.