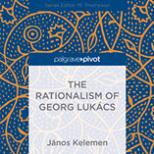 This work explores two lesser known aspects of Georg Lukács’s thought: his conception of language and theory of science, and his achievements in literary history. This book defends Lukács’s concept of rationality and presents an original argument demonstrating that there are good reasons for choosing rationalism; that is, it is possible to establish the foundations of rationalism. Internationally unknown aspects of Lukács’s oeuvre are also investigated, making extensive use of a number of his untranslated writings. János Kelemen’s main statement is that, for the reader, the most important motif of Lukács’s thought is its defense of reason. Students and scholars of philosophy, political science, literary theory, and the humanities will be interested in this book.

“Georg Lukács is one of the highly controversial towering thinkers of the 20th century. János Kelemen’s book presents a deep insight into the main theoretical aspects of Lukács’s work . It is also a significant contribution to the still-missing assessment of the philosophical debates triggered by the political left within post-metaphysical philosophy.” – Agnes Heller Professor Emeritus, The New School for Social Research, USA

I. ‘To Supervise the Existence of Reason’
1. Introdcution: Language, Science, Reason
2. Lukács’s Ideas on Language
3. Lukács’s Conception of Science
4. Lukács’s Rationalism: In Defence of the Destruction of Reason
II. Problems of Literary History and Aesthetics
5. Art’s Struggle for Freedom: Lukács the Literary Historian
6. Lukács and Fülep: Two Hungarian Critics of Benedetto Croce
7. Lukács and the Art of Film: On a Chapter of the Specificity of the Aesthetic
http://us.macmillan.com/therationalismofgeorglukacs/J%C3%A1nosKelemen

The Rationalism of Georg Lukács