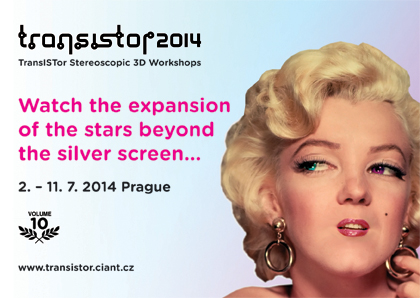 Traditional stereoscopic filmmaking workshop Transistor 2014 is calling for participants for the 10th edition. If you are interested in S-3D, don’t hesitate to apply. The regular deadline is 15.6.2014. But extended application deadline for early birds with the reduced fee is 5.6.2014 and scholarship application for new EU member states or filmmakers with interesting projects in development until 10 June.

As usually, this year there will be two courses simultaneously: S-3D documentary and S-3D fiction, both dedicated to the process of stereoscopic filming from its very beginning (script, storyboard, technical background) till its last phases (postproduction, distribution and sale strategy). One of the specialties of Transistor is anyway its accent at hands-on stereoscopic shooting. We invite the best European directors, stereographers, DOPs and producers as Yves Pupulin (Binocle 3D), Matthias Bollinger (HMS), Ludger Pfanz (BEYOND) or Jakub Ježek (Frame Store) to provide the participants with the deep insight into the magical world of third dimension.

This year we chose the theme of film stars – the stars of the silver screen, therefore the educational shooting will happen at two legendary venues connected with the golden era of movie making: Barrandov Film Studios in Prague and in Karlovy Vary right during 49th International Film Festival.

Feel invited not only to shoot at those two magical places, but even to liberate the stars for jumping out of two dimensions of classic film frame, from 2nd July till 11th of July.