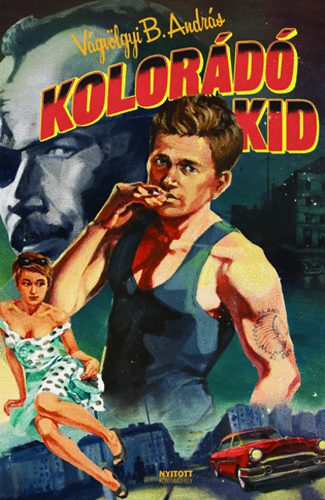 The Center for Media and Communication Studies (CMCS) cordially invites you to an English language screening of András Vágvölgyi’s Kolorádó Kid, a film noir depicting the years following the 1956 revolution.
The screening will be followed by a discussion with the director András Vágvölgyi and András Mink of the Open Society Archives, who is a well-known expert on the period.

About the film: Kolorado Kid
Kádár noir. Flaszter western.  Jailhouse rock.
In the summer of 1959 Béla Kreuzer – a loader and a gambler – is fettered. He is placed under pre-trial detention and at first he thinks this is because of his dubious activities on the racecourse, but it soon turns out that the reason he is arrested is that he had
participated in the revolution of 1956. During the investigation Béla’s old friend turns his back on him as does his common-law
wife. The only person he has left whom he can trust is his cell mate. In the meantime the female prosecutor is baying for his blood, and the detective, who is more like a character from Svejk, just wants the case off his hands. The prosecutor asks for the death penalty, but the judge opts for a senctence of 15 years in jail, which Béla Kreuzer serves to the last day. When he comes out it is 1974 and he finds that the world is no longer the same…

András B. Vágvölgyi is a  writer, journalist, filmmaker, and political commentator. As director, he is known for Kolorádó Kid
(2009) and Ken, avagy egy város megtalálja a gyilkost (1997). In addition to his career as a film director, he is well known as a
journalist and founder of the Hungarian weekly Magyar Narancs. Vágvölgy’s latest film project is connected to the Roma murders and trials taking place in Hungary in 2013. To raise awareness about the victims of racially motivated attacks in the country, he  produced a series of short films called Their Skin Was Their Only Sin.

András Mink is a Research Archivist at the Open Society Archives and an expert on Hungarian socialism in and the 1956 Revolution. His publications cover the history of Communism, post-war Hungarian history, the 1956 revolution, and the Kádár-era. He is one of the teaching fellows on the Archives, Evidence and Human Rights course offered by OSA to CEU students.
The event is co-organized with the help of Ferenc Hammer, Associate Professor at the Institute for Art Theory and Media Studies, Eötvös Loránd University.