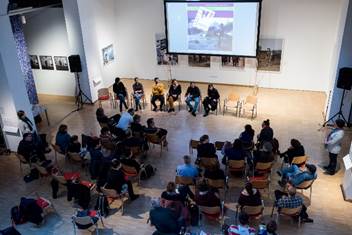 CALL FOR PARTICIPATION IN FILMMAKING WORKSHOP

European societies are facing increasing tensions spurred by the ongoing refugee crisis, continuing wars, and increasing global migration. Hundreds of thousands of people have arrived to Europe in search of safety and a possibility to start new lives. But in order to successfully integrate to the new communities, many fears and prejudices must be faced and overcome. Our Verzio DocLab workshop this year is focusing on the processes of integration, looking into ways people from different cultures, backgrounds, and religions can live together. We invite you to share stories from your communities, focusing on people who had to strike new roots in your country and reflecting on their journeys or experiences about their new home. We encourage advanced and beginning filmmakers interested in documentary and human rights to use the workshop as a platform for making a short film or a trailer from your footage to tell powerful stories of perseverance, solidarity, and multiple challenges. An international team of filmmakers, editors, and human rights experts will offer guidance and mentorship in structuring, editing, and post-producing your films. The workshop takes place at the CEU Library’s Mirabaud Media Lab (Budapest) and is organized by Verzio IHRDFF and the CEU Visual Studies Platform.

The participation is free of charge, the participants are responsible for organizing their own travel and living arrangements in Budapest. Basic filming experience is required. The editing platform provided is Adobe Premiere Pro.  Those attendees editing a project on another platform will need to provide their own laptop.  All attendees will need an external hard drive for storage and editing of footage.

The workshop’s participants will make short films about different means and processes of integration, addressing issues of discrimination, prejudices or positive experiences of community-building and new ways of multicultural coexistence. The 3-5 minute films are imagined as personal statements calling for understanding and action. There is no restriction on form, the stories however should be well researched, and based on lived experience. The work can be experimental but should foreground individual personalities and aim for impact. The workshop participants should arrive with footage shot prior to the workshop and will get tutoring in editing and cinematic structure.

The human face is one of the strongest means of storytelling. We invite you to film someone who has recently found a new home in your country looking at his/her own face in a mirror, reflecting on what they see. All kind of thoughts and emotions can come up doing this. Is their face still the same or did the journey leave traces behind? Maybe they were not able to see themselves in a mirror for a long time. With this poetic approach we hope to capture real and deeply personal stories from people that recently came to Europe. Participants of this project will receive basic guidelines before filming to ensure visual and thematic unity. During the workshop the participants will edit their own segments based on the guidelines discussed in the group and possibly create a longer piece from the individual stories.

The resulting works (or extracts from work in progress) will be screened on the last day of the festival and circulated on-line. We aim at raising awareness and calling for a change in attitudes towards refugees.

Tutors:
Moniek Wester Keegstra is an independent documentary (web)filmmaker, editor, interview trainer and film coach. She worked with NGOs Doctors Without Borders, Oxfam Novib and Amnesty International. Her Gaza, Gabbers, Graffity co-produced by Amnesty International was nominated for the Prix d’Europe. Moniek was involved as filmmaker and creator of the online platform 26,000 Faces with short film portraits about asylum seekers in the Netherlands. She is co-creator of the online Lifeboat Project.
Zsuzsanna Gellér-Varga studied filmmaking at UC Berkeley (USA) as a Fulbright scholar. Her Screw Your Courage (2000) won awards at several US film festivals and was broadcast on public TV. She worked for the New York Times Television as a video-journalist and later directed documentaries Once They Were Neighbours, (2005), Synagogue For Sale (2007), and Mr. Mom (2009), which were screened internationally and broadcast on public TV. Currently she is D.L.A. candidate at the University of Theater and Film Arts in Budapest and teaching documentary ethics at the DocNomads program.
Ursula Ambach is filmmaker and editor. She studied communications design at the University of Applied Sciences in Würzburg and the Bond University Film Department in Australia. She has a diploma in directing/project development at the ZeLIG school for documentary in Bolzano, Italy. As an editor and author she works for the public broadcaster Bayerischer Rundfunk in Munich and in the ARD/BR foreign studios in Rome, Vatikan, Athens and Tel Aviv. She teaches dramaturgy and editing in Göttingen, Würzburg and Munich.
Jeremy Braverman is Media and Visual Education Specialist at CEU. He provides direct support for media and visual literacy through instruction on state-of-the-art equipment, practical training in communicating through moving images, and promotion of high technical standards for media production. Prior to joining CEU, Jeremy spent 15 years teaching filmmaking, most recently as Associate Professor and Department Chair at Point Park University in Pittsburgh, PA.
Application material:
·        CV
·        Short letter of motivation (max. 1page)
·        Short synopsis (max. 500 words) of the planned film (in case of the individual project) or the planned character/storyline (in case of the group project)
·        OPTIONAL: if you already have footage shot or selected scenes, you can submit a link to the video material (no more than 10 minutes)
APPLICATION DEADLINE: OCTOBER 3
Selected participants will be notified by October 10
Send your application by email to info@verzio.org (subject: DocLab)
https://vsp.ceu.edu/article/2016-09-07/call-participation-filmmaking-workshop